Here is the list of Best Setting for PPSSPP Android. We will help you with best settings for PPSSPP emulator for better performance and highest FPS.

Hello to all readers and of course games lovers. Since ever I’ve grown up, I always used to be a big fan of action-adventure video games and my most favorite series were God of War. I’ve completed both the PlayStation 2 parts and already completed its PSP based version, God of War: Chains of Olympus, and the Ghost of Sparta on my Moto G Android phone (earlier) and on OnePlus 3. Here we’ve got the same settings. We will help you with best settings for PPSSPP emulator for better performance and highest FPS.

However, at initial, it was a bit difficult to play it on my mobile because of low FPS and graphic glitches. After being familiar with PPSSPP emulator, I tried multiple settings and tested over many games such DBZ series, GOW, some racing games, Final Fantasy, etc., and finally came up with settings which actually work not only to increase FPS but they also bring good graphic quality as well. We’ve recompiled these settings, and re-published this tutorial.

Just tuning the few options in PPSSPP, you’d be able to get the maximum performance to play games more smoothly and less lags, however, the performance of PPSSPP is entirely depends upon the power of the device, Motorola G is good enough to play most of the games and over the PPSSPP, it is giving an awesome performance. In the past, we had a great time with Motorola phone, and now we’ve tested this emulator on OnePlus 3 in order to bring these updated settings.

Below is the Best setting For PPSSPP Android, I’ve figured out with so many attempts, testing, and experiments to achieve high FPS as possible, I hope it will work for you as well.

In this section we cover some major settings that should bring good graphics, and smooth performance. Since, the performance varies from device to device, it would be a good try out some changes on your own. 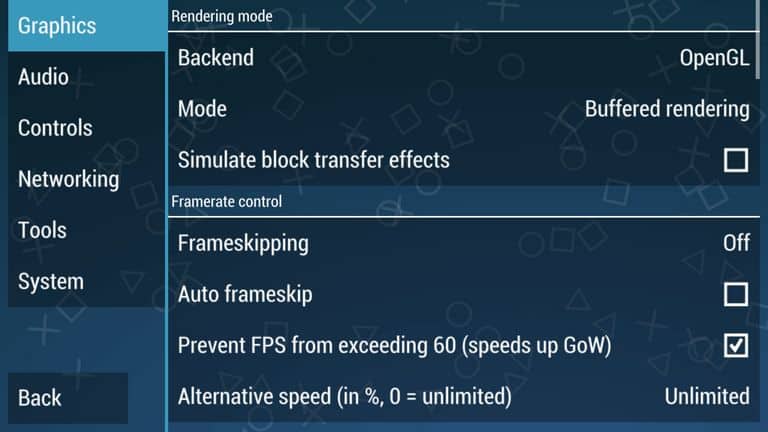 Update 07-1-2018: There has been major change implemented in this emulator few days back. The graphics rendering now supports Vulkan that works very fast, and smooth compare other reset of the shaders.

It works for both, high-end, and low-end devices.

So, going forward, we don’t have choose between such choices. You just need to select Vulkan under Backend. 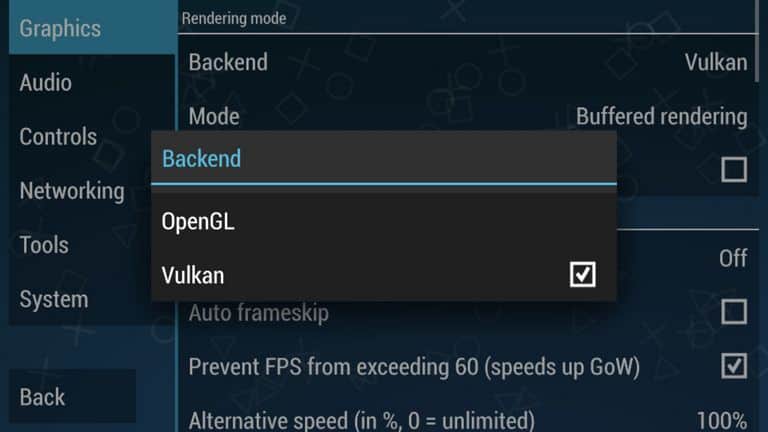 This should bring major performance spike in your PPSSPP gameplay.

Keep off the Frameskipping option, and un-check the Auto frameskip. That helps to ensure a smooth gaming experience.

There are two more settings under this panel. Check the Prevent FPS from exceeding 60 and put 0 values in alternative sped (in %, 0=unlimited). 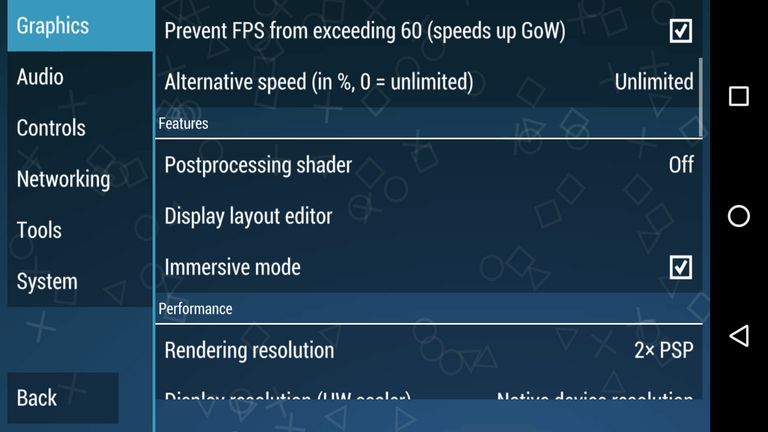 We got little more deeper, and found a shader that improves the performance little bit more, instead of keeping it off as we did before.

Instead of keeping it off, or selecting any other shader, choose Vignette. We’ve seen good improvement in FPS using it on OnePlus 5, and hope that it will work on other devices as wel.

However to make graphics more smoother, one can choose “Bloom” under Postprocessing shader (it may affect performance).

Next, enable the Immersive mode to get full-screen display. 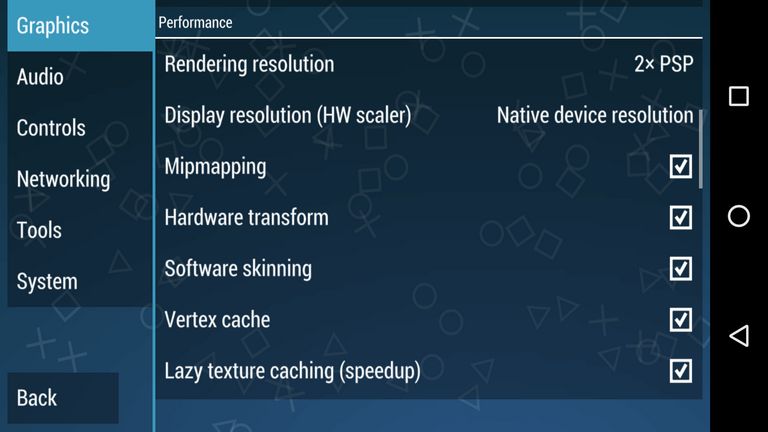 Here comes the most important aspect that gonna boost the entire performance of PPSSPP Emulator. Changes to these settings affect performance directly.

We had many trails, and tests to bring these settings.

If your device is powerful like OnePlus 3, equivalent or even more powerful (Galaxy Series), than high rendering resolution will work.

Note: If your device is kind of low-specs or if you see low performance, then go for 1x Rendering resolution.

That should bring performance to its peak. Chose Display Resolution as mentioned in the above image. 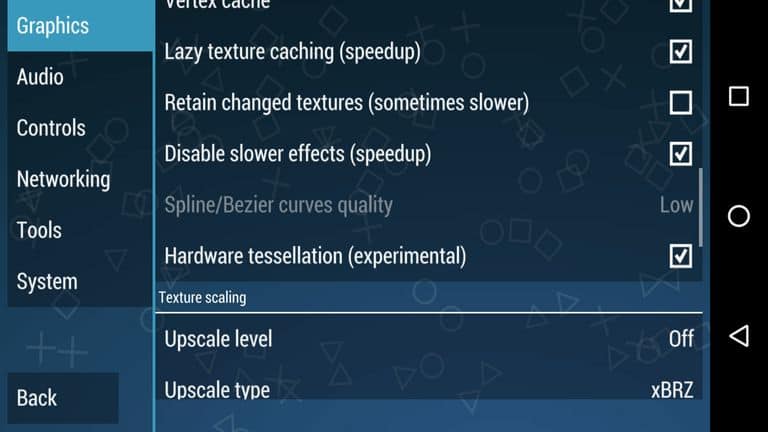 Try to make your own settings by keeping on or off these settings. 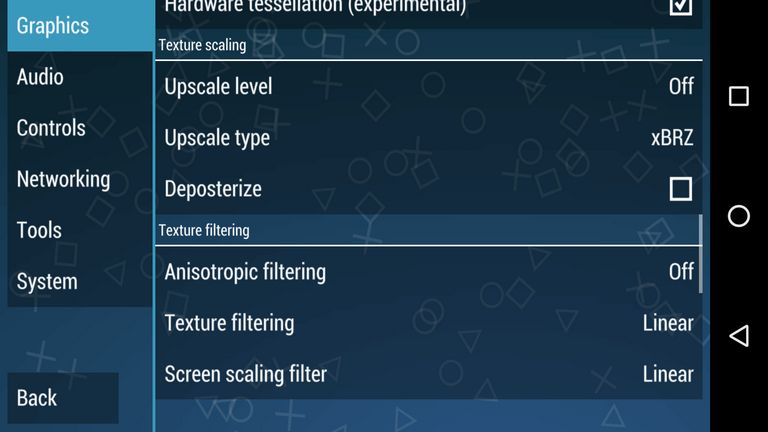 Since we already setup with 2X rendering resolution, there is no need of using Textures scaling and filtering.

Just keep’em off all the time. 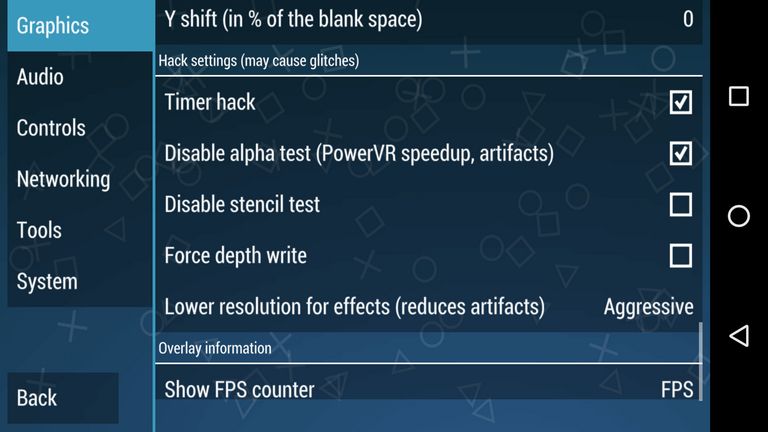 Just like performance settings, these settings play a very important role when it comes to smooth, and stable performance.

And keep Aggressive mode in Lower Resolution for effects.

Don’t make any changes to these settings. They work for most of the devices. 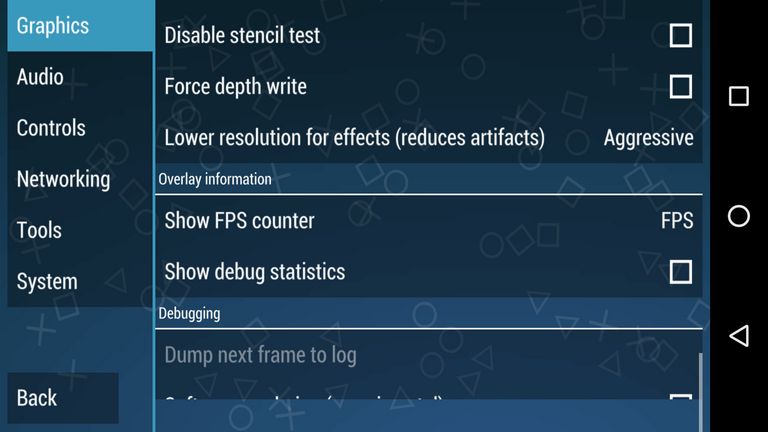 To check the frame rate of games, it is recommended to choose FPS counter. Once you have it enabled, while playing the PPSSPP games, it overlays an information such FPS on current time basis.

Still, this emulator fails to render the audio part appropriately. If you enable it, the outcome is found to be quite noisy, lagging or something that may irritate you. 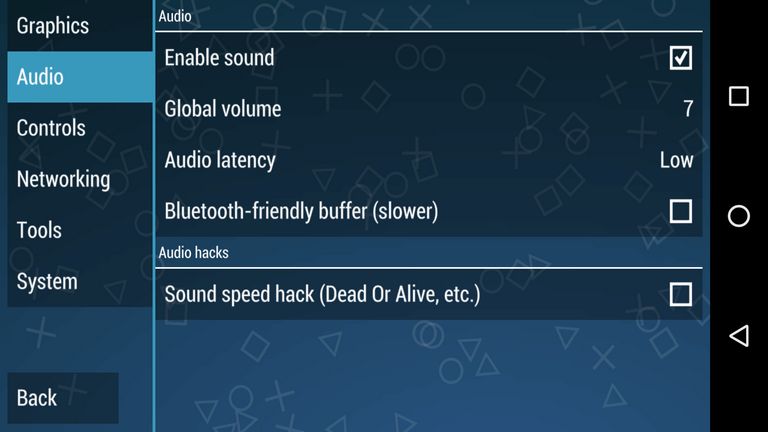 The audio works well with some games, and does not with many.

We recommend to try your own too if it works or not. In our case, it didn’t work with God of War, but works for many other games such as DBZ, and Naruto.

So while playing GOW, we kept this option disabled, and we recommend the same.

Thought, it totally depends upon a user how he/she would prefer the control. Still, we are excited to share our implements.

To play God of War extensively, you need to access R1 and L1 buttons on the Go. To make use of only right hand (or left), we have overlapped, these two buttons as shown in below screenshot: 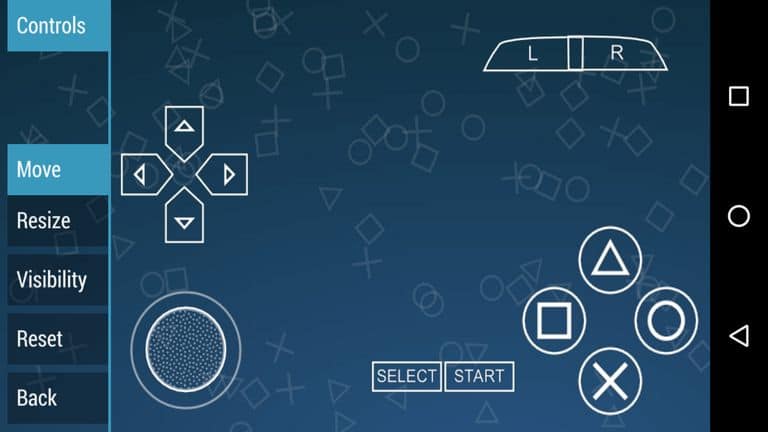 Through these, it becomes easy to use these two using only one finger. Also, one can use both of them at once. 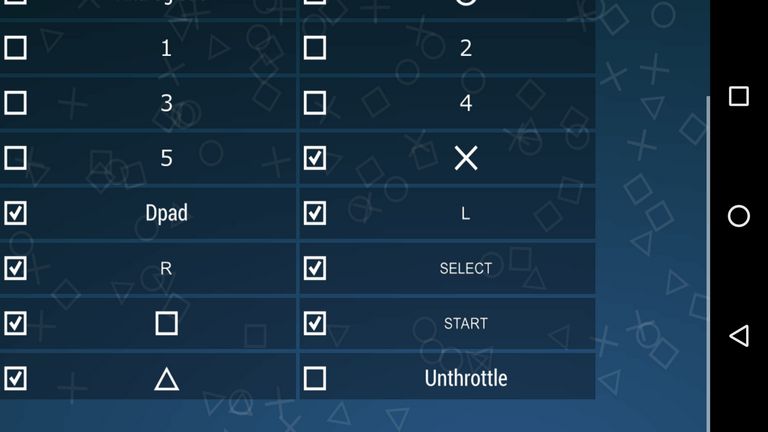 Make further changes as per your comfort.

Under this panel, there is only one thing that we gonna change. Actually, these options come helpful for developers for development purpose. 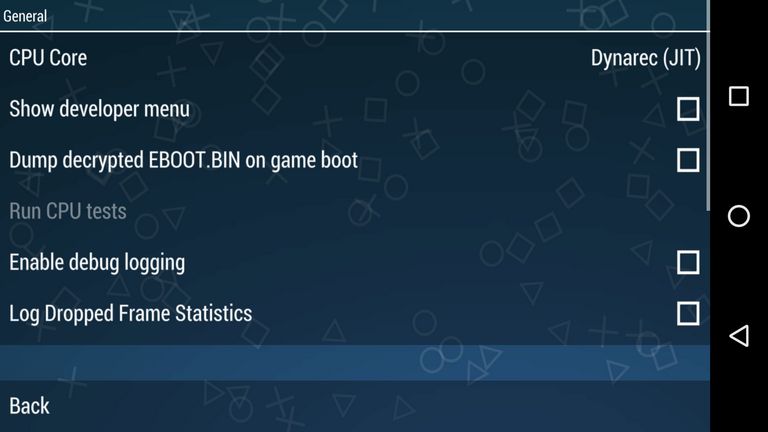 This option basically helps emulator to choose between two different recompilation features. Just Tap on Tools, under it, look for Developer Tools.

Tap on it. Next, under CPU Core select Dynarec (JIT) (something similar).

Selecting this feature, make sure to bring out the maximum outcomes, best PPSSPP performance.

Under this panel, there are several major options to configure PPSSPP emulator appropriately, and optimize for better performance. 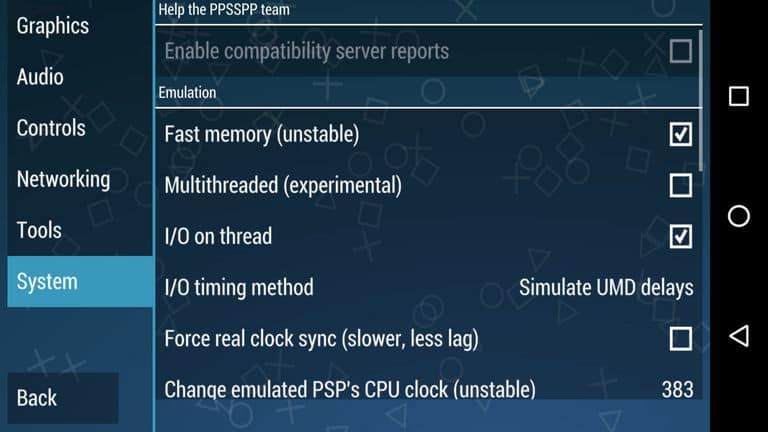 A few changes may affect performance drastically. So we recommend to go for Trail and Error method. Try to make your own settings or just lookout for one that we have mentioned here:

It is important to keep Fast memory (unstable) checked. It works on most of the Android phones, irrespective of their hardware. That means, it can help to improve overall performance.

Multithreaded (experimental), well we keep it off most of the times. We had no preferable outcomes with it. Try it out yourself, it it works or not. Since, this Emulator varies device to device, it might worth a try. 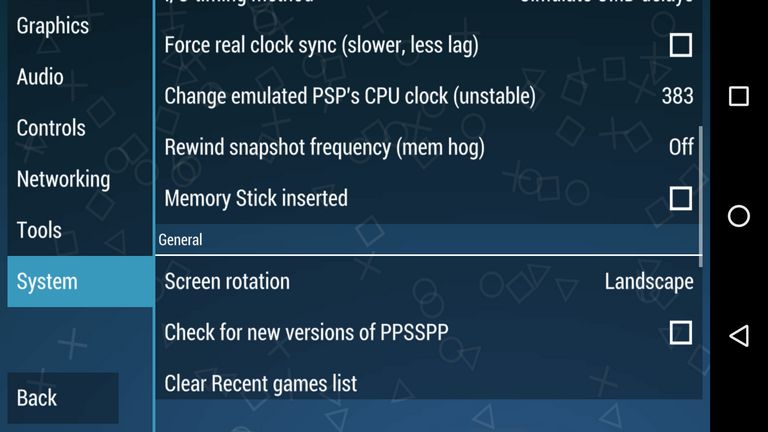 Try to put a lower value to Change emulated PSP’s CPU clock (unstable) . In our case, we put 383, and tried few more values near to it. If you see no impact, let it be in default.

And let other options unchecked. 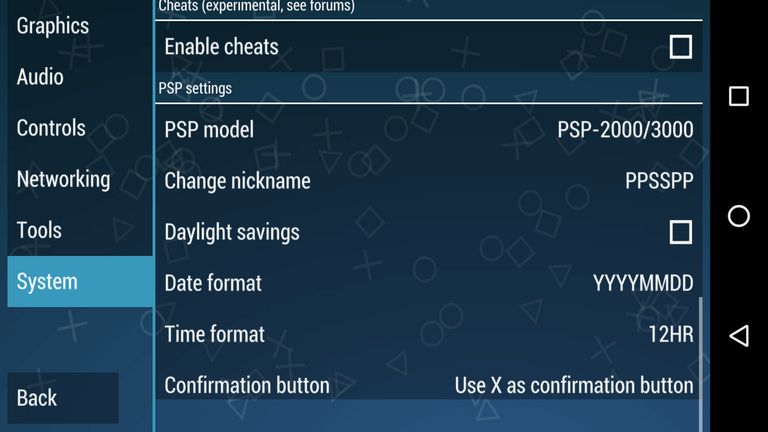 For better support, choose PSP-2000/3000. Actually, it does not help with performance in anyway, but it helps to increase gaming support.

All done! You’ve tuned your PPSSPP Emulator for best performance.

However, you may own change settings to tune it more better as performance device to device may differ for different settings. I hope this settings helps you for better game play of the PPSSPP emulator on your Android device. You’re most welcome to share your best PPSSPP setting as well, your comments and suggestions are greatly appreciated.

PPSSPP works on all modern Android devices. It’s been confirmed to run on the following:

How to Unlock bootloader of Moto G 3rd Gen 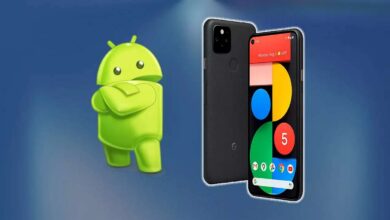 How to install a pure Android on your phone 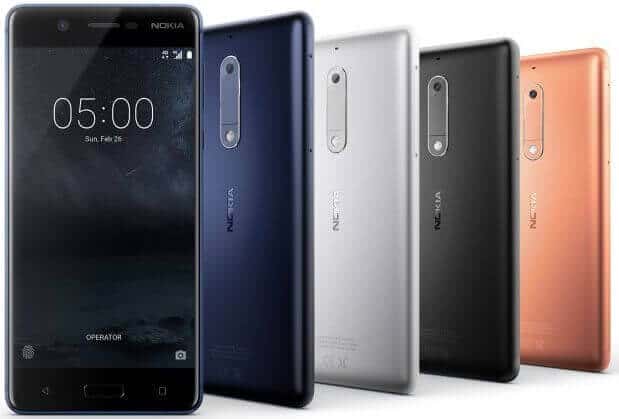 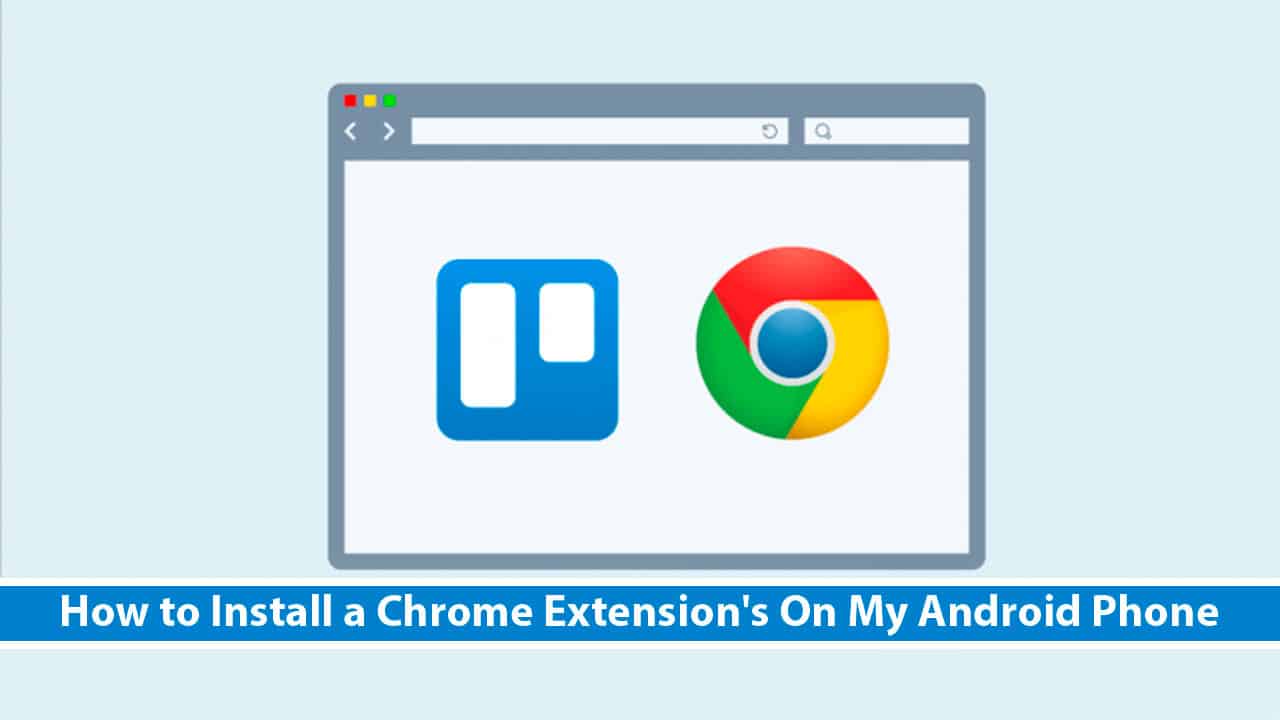 How to Install Android Chrome Extension